The Hershey Free Global Impact Fund for Transformation (GIFT, formerly known as the Global Ministry Project Fund) was established to help fund specific and strategic ministry initiatives in cross-cultural contexts around the world. We specifically seek to use these funds to help the global workers with whom we partner. The funds are intended to help with one-time capital projects for our cross-cultural worker families, theological education for nationals, and responding rapidly to opportunities that arise.

In 2018, $103,000 was distributed to our missionary partners around the world to share the gospel! Our gifts were shared with individuals and organizations who serve across the globe. Most directly, the gifts impacted countries across South America, Africa, Asia, and Eastern Europe. Below are some stories about how the projects impacted the ministries and lives of people around the world. Thank you for the crucial part that your giving has played! 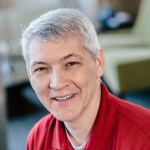 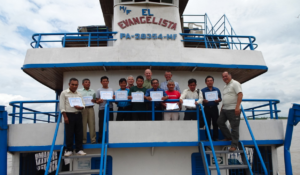 Hershey Free has partnered with Blair and Joan McGwire for over 16 years as they minister along the Ucayali River to the Shipibo and other tribal peoples of Peru. Over the years, we have supported APROMISHI, the association of Shipibo pastors, to expand their ministry including construction of boats to allow the local Peruvian Church, indigenous missionaries, and international missionaries to travel the Ucayali river. The ministry here has flourished and is achieving sustainability with the local Pucallpa church and Shipibo pastors continuing to evangelize unreached groups along the Ucayali and beyond. The boats are primarily used for missionary purposes but have also been creatively used for business purposes, such as banana shipping and water taxi, to fund the cost to maintain them each year.

This year’s projects included offering additional training in Orality (using memorized Bible stories for non-literate audiences) and Bible Pathways training to encourage the transfer of teaching responsibilities to Shipibo and other indigenous groups up and down river. In December, the first group completed all ten courses available in the Bible Pathways program. After the training was completed, Blair reported, “It’s amazing to see how far these faithful men have come since our first course back in 2016.” Not only does this create sustainability of the ministry, but many of these groups are considered non-contact groups by the Peruvian government so it’s the only way for these people to hear the gospel.

This year we also supported Julia Bixler and Worldwide Evangelization for Christ (WEC) Latino to train seven Latino missionary candidates in Trinidad and Tobago to go overseas as long-term missionaries among people groups that are among the least-reached in the world. These Venezuelan, Colombian, and Cuban families plan to serve long-term in Chad, Bangladesh, and Senegal, all predominantly Muslim nations. 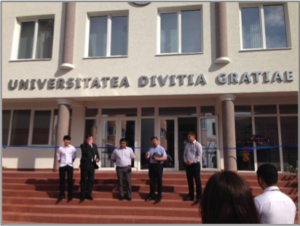 We continue to support the University Divitia Gratiea (UDG) with their counseling program and counseling center in Moldova. God has blessed UDG with the unique opportunity to have the only Christian Master’s in Counseling Program and Counseling Center in Moldova and that region of the world. It is positioned in an opportune geographic area of the world in that there are pockets of interest in several surrounding countries such as Romania, Bulgaria, Ukraine, and majority Muslim countries in Central Asia. This year through the GIFT program, we supported their transition to a new director as the university is going through an accreditation process. This resulted in the program being accredited by the Euro-Asian Accreditation Association for five years. Pastor Omar Zook traveled there in October 2018 to teach a course and become better acquainted with the new director and reported back, “I came away feeling very positive about her in this position and the support of UDG for this program and center.” 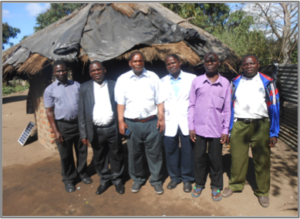 The primary focus of the trip started with time in Mozambique, which has gone through 22 years of civil wars resulting in many pastoral training programs being abandoned, but presently the country is experiencing peace. More than 30 pastors were trained during his time in Mozambique.

Additionally, in Africa, Jon and Melissa Eager have been ministering to the people of Tanzania. One means of outreach includes use of a portable solar video kit to show films as a good starting point for community evangelism. They have trained a local Sandawe lay evangelist, Odilo, in the use of the films. Our project funded the purchase of a portable solar video kit for Odilo. This has enabled Odilo to have the flexibility to travel around on his motorcycle with the video kit to show the films without dependence on outside missionaries or their vehicles. Additionally, with the demand of the video, the Eagers are often scheduled out months in advance. Since September Odilo has already used it for four outreaches, partnering with several churches in different, more remote, villages to show the Luke Film in Kisandawe, the Jesus Film in Swahili, the King of Glory film in Swahili, and some shorter Christian Swahili films on marriage.

This year the GIFT program sponsored multiple events in partnership with Hershey Free missionary Glen Osborn and China Outreach Ministries (COM). Events were hosted for Chinese international students at Penn State University and the University of Pennsylvania (UPenn) campuses. The overall objective of these events is to reach Chinese students with the gospel of Jesus Christ while they are studying here in the US. Some Chinese students are in the US for several years while others are only here for a short time before returning to their homeland. It is the passion of COM staff to reach every Chinese student who comes to America, with the hope and joy of knowing Jesus. The response of Chinese students and scholars when they begin to understand that the creator of the universe loves them and has a plan for their lives is amazing! At UPenn, COM staff member Gregg Smyrl organized a welcome picnic in the fall for Chinese students. As a result, there were three professions of faith, three baptisms, and many were introduced to Christianity and the Bible. At Penn State, COM staff member Kirk Zuercher hosted a Chinese Christmas party attended by 400 Chinese students. The gospel was shared through music and a Christmas message. This event will lead into Bible studies beginning in January 2019. The team also hosted a kids’ event. Some heard the gospel for the first time while others had the opportunity to reconfirm the gospel message.